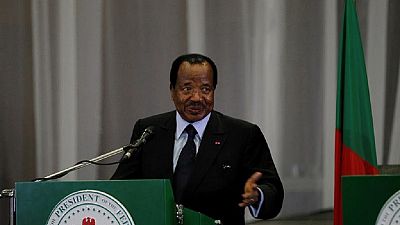 An opposition politician and critic of Cameroon president Paul Biya has been jailed by a military court in a trial human rights group, Amnesty international, described as “unfair and deeply flawed.”

Aboubakary Siddiki is to serve 25 years behind bars after the military court in Yaounde found him guilty of charges including hostility against the homeland, revolution and contempt of the President.

Siddiki who is president of ‘Mouvement patriotique du salut camerounais’ – the main opposition party in northern Cameroon was arrested in August 2014 along with one Abdoulaye Harrisou – a well known notary.

We are calling on the Cameroonian authorities to release and drop all charges against Aboubakary Siddiki and Abdoulaye Harissou, and refrain from ever using military courts to prosecute civilians.

Harrisou on his part was jailed three years for ‘non-denunciation.’ Allied to their cases, the court also dropped all charges against three journalists – Baba Wame, Felix Ebole Bola and Rodrigue Tongue – who were also charged in 2014 with ‘non-denunciation’ of information and sources.

“Aboubakary Siddiki is the latest victim of the Cameroonian authorities’ strangling of opposition voices. Alongside Abdoulaye Harissou he has already spent more than three years in detention, suffered torture and now he must face a future behind bars on the basis of a politically motivated and deeply flawed trial,” said Ilaria Allegrozzi, Amnesty International’s Lake Chad Researcher.

Amnesty whiles hailing the dropping of charges against the journalists maintained that they did not have to face the said charges in the first place. They also called on the authorities to release Harrisou who between his arrest in 2014 and now has served three years in detention.

“Siddiki, Harissou and the three journalists have attended 26 hearings before the Yaoundé military court, with hearings repeatedly postponed.

“The trial was marred by multiple irregularities including witnesses refusing to testify because of intimidation, the admission of evidence extracted under torture the failure to disclose relevant documents to the defense lawyers,” Amnesty said in a statement released on Monday.

They stressed that using the military courts to try civilians was unacceptable because many processes in the normal legal structure are not respected. “We are calling on the Cameroonian authorities to release and drop all charges against Aboubakary Siddiki and Abdoulaye Harissou, and refrain from ever using military courts to prosecute civilians.

“This unfairness of this trial underscores the lack of independence and impartiality inherent in military courts in Cameroon, as elsewhere. The presumption of innocence, the right to an adequate defence and the independence of proceedings were all seriously undermined,” Ilaria added.

Cameroon is currently facing a political and security crisis in the English speaking regions – North West and South West. People in the region want to secede from the country under the banner of the Ambazonia republic. Clashes between protesters and security forces has led to deaths, injuries to others and mass arrests.