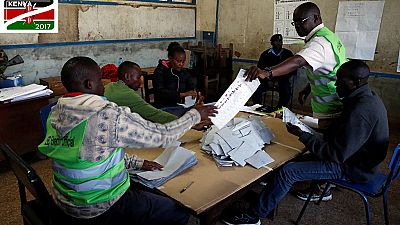 Kenya’s electoral commission has announced an estimated 34.5 percent voter turnout after the country’s presidential election rerun which was marred by opposition boycott, protests and deadly clashes.

The Independent Electoral Boundaries Commission (IEBC) said on Thursday that 35, 564 polling stations opened for the election out of the 40, 883 in the 47 counties nationwide.

The current percentage is a downward revision of an earlier turnout figure of 48 percent announced by the IEBC.

Voting in four counties, which are opposition strongholds, were postponed to Saturday due to insecurity caused by protesters engaging in running battles with the security forces.

The counties include Migori, Siaya, Kisumu and Homa Bay where protesters who were supporters of the main opposition party National Super Alliance (NASA) led by Raila Odinga failed to stay at home as ordered by their leader.

Three people were reported killed as protesters threw stones at the police who in turn fired tear gas cannisters, water cannons and in some cases used live bullets.