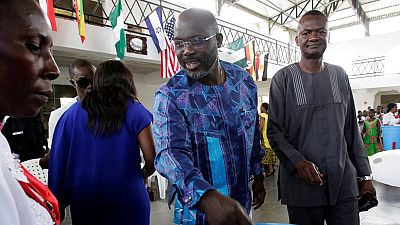 Former Liberian warlord and candidate in the October 10 presidential election, Senator Prince Yormie Johnson, has endorsed the candidacy of George Weah for president.

His endorsement comes days after the two were spotted in Lagos at the church of popular Nigerian televangelist T.B. Joshua to “seek God’s face” for Liberia.

The Senator of Nimba County who came fourth with 8.2% of votes told his Movement for Reconstruction and Development (MDR) supporters in Monrovia on Thursday that they should support the Coalition for Democratic Change (CDC) of Weah in the run-off election on November 7.

The run-off will be a showdown between the former football star and the current Vice President Joseph Boakai who came second in the first round with 28.8% of the votes.

The two candidates are vying to replace Nobel laureate Ellen Johnson Sirleaf who has served as president since 2005.

The National Elections Commission (NEC) said they are expecting 3,053,435 ballots on October 28 in preparation for the November 7 run-off.