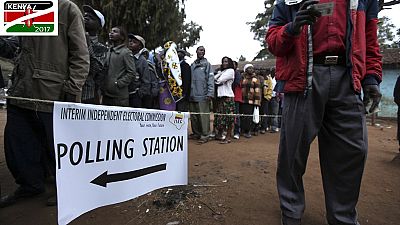 <h3>Kenyans go to the polls on August 8, 2017 to elect their fifth president since independence in 1964.</h3> <p>The main contenders are the sons of the country’s first president and vice president Jomo Kenyatta and Jaramogi Oginga Odinga respectively.</p> <p>Incumbent President Uhuru Kenyatta and former Prime Minister Raila Odinga are going head-to-head in the elections together with six other candidates including Mohamed Abduba Dida, John Ekuru Longoggy Aukot, Shakhalaga Khwa Jirongo, Japhet Kavinga Kaluyu, Michael Wainaina Mwaura, and Joseph William Nthiga Nyagah.</p> <ul> <li><a href="http://www.africanews.com/2017/08/02/meet-the-eight-candidates-for-kenya-s-2017-presidential-elections/" target="_blank">Meet the eight candidates for Kenya’s 2017 presidential elections</a></li> </ul> <ul> <li><a href="http://www.africanews.com/2017/08/07/kenya-votes-2017-have-a-look-at-the-electoral-system" target="_blank">Kenya Votes 2017: Have a look at the electoral system</a></li> </ul> <p>We take a look at Kenya’s elections history since its independence in 1964.</p> <br/> <h2>Pre-independence elections</h2> <p>The Kenyan African population voted for the first time in 1957 during the country’s legislative elections. The first elections in the British colony took place in 1920. </p> <p>They voted for eight African seats in the parliament which previously had 14 seats for Europeans, six seats for Indians, one for Arabs and six seats appointed for the Africans. </p> <p>The first universal suffrage was held in 1961 and pre-independence political party the Kenya African National Union (<span class="caps">KANU</span>) won majority of seats in the expanded 65-seat parliament despite the European dominance.</p> <p>In the 1963 elections, the system was changed again and seats were increased to 129 House of Representatives and a 38-seat Senate. </p> <p><span class="caps">KANU</span> won majority seats and the country saw its first African Prime Minister in the person of Jomo Kenyatta. </p> <p>This led to independence in 1964 and Kenyatta became the first President.</p> <p><img src="https://static.euronews.com/articles/38/18/381863/1024x576_bonus-jomo-kenyatta.jpg" alt="" /></p> <br/> <h2> Post-independence elections</h2> <p>Kenya was established as a republic in December 1964, and Kenyatta was elected Kenya’s first president the same month.</p> <p>A disagreement between the president and his first vice president led to the withdrawal of Jaramogi Oginga Odinga from Kenyatta’s <span class="caps">KANU</span> party in 1966, and the formation of the rival Kenya People’s Union (<span class="caps">KPU</span>) party together with his supporters in parliament.</p> <p><img src="https://static.euronews.com/articles/38/18/381863/1024x576_bonus-Jaramogi-Oginga-Odinga.jpg" alt="" /></p> <p>This entrenched the ethnic divisions along party lines with the Kikuyu majority behind <span class="caps">KANU</span> and Luo behind <span class="caps">KPU</span>.</p> <p>A by-election was held that year after a constitutional amendment to allow the breakaway <span class="caps">KPU</span> to stand for elections.</p> <p><span class="caps">KPU</span> won majority of votes but <span class="caps">KANU</span> won majority of seats. The Senate was abolished subsequently and the House of Representatives transformed into the National Assembly.</p> <br/> <h2>One-party state era</h2> <p>Kenya was transformed into a one-party state in 1969 and <span class="caps">KPU</span> was banned leaving <span class="caps">KANU</span> as the only party that won all seats in 1969, 1974, 1979, 1983 and 1988 elections led by Kenyatta.</p> <p>Kenyatta died in office in 1978 and the presidency was continued by his vice president Daniel arap Moi who became the second president.</p> <p>In 1992, President Moi restored multiple party politics after democratic pluralism swept through Africa. He won that year’s elections.</p> <p><img src="https://static.euronews.com/articles/38/18/381863/1024x576_bonus-danielarapmoi.jpg" alt="" /></p> <br/> <h2>Multi-party politics restored</h2> <p>President Daniel arap Moi won the 1997 elections and groomed current president Uhuru Kenyatta to take over the presidency and continue his father’s legacy in 2002.</p> <p>Moi stood down in 2002 for Uhuru Kenyatta to stand. He led <span class="caps">KANU</span> to its first defeat to an opposition coalition led by Mwai Kibaki.</p> <p><img src="https://static.euronews.com/articles/38/18/381863/1024x576_bonus-mwai-kibaki.jpg" alt="" /></p> <p>The coalition fell apart and Uhuru backed Kibaki to win the 2007 elections against rival Raila Odinga who had unsuccessfully contested for the first time in 1997 after he returned from exile to take part in the country’s multi-party politics.</p> <p>Odinga supported Kibaki in the 2002 elections as part of the opposition coalition until they fell out after the polls.</p> <p>The 2007 elections saw some 1,300 people killed and more than 600,000 displaced after violence that saw Uhuru Kenyatta and his running mate William Ruto indicted by the International Criminal Court in 2011 for incitement of the ethnic violence against Odinga’s supporters.</p> <p><img src="https://static.euronews.com/articles/38/18/381863/1024x576_bonus-2007electionviolencekenya.jpg" alt="" /></p> <p>The charges were dropped against Kenyatta in December 2014 and against Ruto in April 2016 due to lack of evidence.</p> <p>The post-election violence brought forth the 2008 National Accord and Reconciliation Act. This made Odinga the first Prime Minister since 1964, and Uhuru his deputy.</p> <p>Elections were held in 2013 under the new constitution in 2010 that was approved after a referendum. Uhuru Kenyatta defeated Raila Odinga, whose party won the most seats in the National Assembly.</p> <p>Uhuru is running again in 2017 for his second term against Raila Odinga who has been unsuccessful in 1997, 2007 and 2013.</p> <p><img src="https://static.euronews.com/articles/38/18/381863/1024x576_bonus-kenyaelectioncandidates.jpg" alt="" /></p> <br/> <h2>August 8, 2017 elections cancelled</h2> <p>Kenya’s Supreme Court cancelled the August 8, 2017 presidential election on September 1, 2017 citing electoral irregularities after accusation of fraud by the opposition National Super Alliance (<span class="caps">NASA</span>) party led by Raila Odinga.</p> <p>The Independent Electoral and Boundaries Commission (<span class="caps">IEBC</span>) set October 26 for the repeat election which will be participated by all the candidates, according to a court order, except Cyrus Jirongo who was recently declared bankrupt by a court.</p> <p>Raila Odinga has vowed to withdraw from the repeat elections amid protests calling for reforms at the <span class="caps">IEBC</span> and postponement of the re-run polls.</p> <a href="http://www.africanews.com/tag/africa-elections/" target="_blank">Click here for all the election news on our Africa Elections page</a>