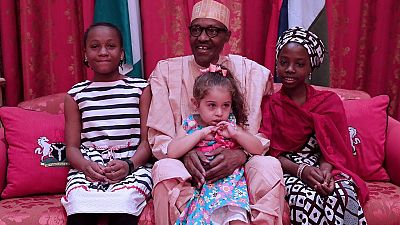 But once in a while presidents have taken time off their schedules to engage in some light duties. Nigerian president Muhammadu Buhari on Monday was caught in one such light duty.

The leader of Africa’s most populous nation opened the doors of the presidency for three young fans. Two of whom got the meeting via a Twitter campaign.

I am hoping that it will not be the first and last time we will be meeting while I am here. We will continue to meet.

The third had donated her lunch money for campaign of the then presidential candidate, General Muhammadu Buhari. A presidential personal assistant shared a profile of the three visitors to Aso Villa in Abuja.

President Muhammadu Buhari’s guests are here in the Presidential Villa.

The story of Aisha Aliyu Gebi

She wrote a letter to President Buhari – which letter was posted by her uncle on Twitter. She made a request to meet the president in her letter.

It read in part; ‘I wanted to ask you if I can come and see you. I’ve always wanted to see a president face to face.’ Her uncle asked for retweets in order to ‘make her dream come true.’

She finally got to meet the president face to face at which occasion she present him with a framed copy of the letter that she had originally written. After receiving the gift he asked of her name and was told Aisha – name of his wife – he responded with laughter, ‘Aisha, my good God!’

As she wished in her 26/8/17 letter, Aisha Aliyu Gebi has today, met President MBuhari ‘face to face’, she came along with the letter too. pic.twitter.com/FLg6RyJPfD

The story of three-year-old Maya Jamaal

In the case of Maya, her father posted a 10 second video of her praying for the health of Buhari at a time when the president was on sick leave in the United Kingdom.

In a series of videos posted on Twitter he made several appeals to the personal Twitter handles of Buhari and that of the presidency seeking for his daughter to meet with the president.

Maya’s lucky day was tied to that of Nicole and Aisha as the three met with Buhari. In her case, her daddy had to carry a shy Maya to greet the same Buhari she had longed to meet.

Little Maya has spent more than 30 minutes with President Muhammadu MBuhari today in his office at the Presidential Villa. https://t.co/I7at0nXMP4

Maya meets PMB today, she was so shy — Mr. President jokily says; how can you be so shy when your video has been seen all over the world. pic.twitter.com/uoRB5ODqfE

The story of ‘benevolent’ Nicole Benson

In 2014, 9-year-old Nicole Benson of Lagos State donated her lunch money to the president in his capacity as presidential candidate of the ruling All Progressives Congress (APC).

At the time she was accompanied by current Lagos State governor, Akinwumi Ambode. Buhari thus invited her over for a ‘reunion’ of sort.

‘Thank you very much for your contribution,’ Buhari said when he met Nicole for the second time – the first time after her donation three years ago.

‘Thank you very much for your contribution’ President MBuhari to Nicole, who donated her lunch money to his campaign team 3 years ago. pic.twitter.com/WY42w6Prj2

“I am hoping that it will not be the first and last time we will be meeting while I am here. We will continue to meet”. — President MBuhari pic.twitter.com/e8kQM47Kir