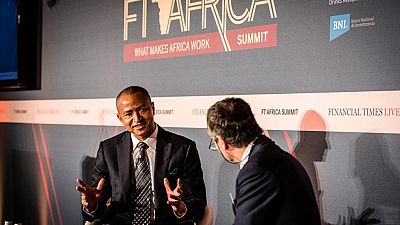 <p>Moise Katumbi, exiled opposition leader and presidential hopeful of the Democratic Republic of Congo (<span class="caps">DRC</span>) says he will return to the country in December this year to participate in elections.</p> <p>Katumbi, 52, says he remains the only political opposition figure that incumbent Joseph Kabila was afraid of. </p> <p>“The only man Kabila is scared about in the country is me,” Katumbi said. “Congo is losing every day, every minute, every second Mr. Kabila is in office. His mandate is finished,” he told journalists in London on Monday.</p> <p>Katumbi who was part of global leaders at the 4th Africa Summit organized by the Financial Times said Congo’s future rested with the private sector, whose interest he was poised to champion as president.</p> <p>“If I win the election, I need to change that country, to invite all of the investors to come and help us to build our country. It is the private sector that is going to make Congo strong,” the former governor of Copper-rich Katanga province stressed.</p> <h2> Kabila and <span class="caps">DRC</span>’s political uncertainty </h2> <p>The <span class="caps">DRC</span> is effectively in a state of political uncertainty. Overdue elections is at the heart of the situation. With Kabila’s mandate having expired in December 2016, elections were due but failed to hold due to the unavailability of a voters register and insecurity in parts of the country. </p> <p>It remains to be known whether the <span class="caps">DRC</span> will hold elections this year and more importantly whether Kabila will contest in the said polls. He has served his second constitutional term and a political agreement bars him from contesting when next polls are organized.</p> <p>The electoral body continues its registration of people across the country but has maintained that an election is highly improbable for this year. Opposition protests are usually dispersed by police crackdown.</p>

The only man Kabila is scared about in the country is me. Congo is losing every day, every minute, every second Mr. Kabila is in office. His mandate is finished.