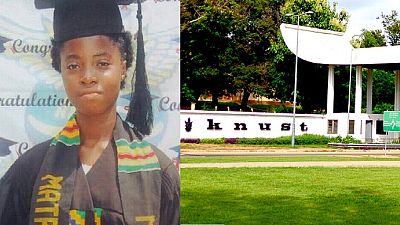 <h3>A 13-year-old girl has been admitted into Ghana’s Kwame Nkrumah University of Science and Technology (<span class="caps">KNUST</span>) in the Ashanti Regional capital Kumasi where she is the youngest student ever accepted.</h3> <p>Ruth Ama Gyan-Darkwa, who will be studying for a BSc degree in Mathematics, was born on May 29, 2004. She lives in Kumasi with her family at a bungalow in the high school where her father teaches science.</p> <p>She studied General Science at St. Louis Senior High School in Kumasi where she gained admission at the age of 10 after writing the Basic Education Certificate Examination (<span class="caps">BECE</span>) in the first year of junior high school, her father Kwadwo Gyan-Darkwa told local media.</p> <p>Despite being four years younger than her mates, Ruth Ama Gyan-Darkwa completed her senior high school education with passes that gained her admission into one of Ghana’s prestigious universities.</p> <p>It is reported that her sister, who also attended the same university at a tender age, will graduate next year at the age of 18.</p> <p>In Ghana, children are mandated to start the six-year primary education at the age of six. This is followed by the three-year junior high school education and then the three-year senior high school education.</p> <p>The average age for a child to enroll in university is 18.</p> <p>A number of young students like Ruth Ama Gyan-Darkwa have been accepted into universities worldwide including 13-year-old Kimora Hudson who is also the youngest student to be accepted at the University of West Georgia (<span class="caps">UWG</span>) in the United States.</p> <p>In 2016, 12-year-old Jeremy Shuler, who was home-schooled, was accepted into the Cornell University in New York as its youngest ever student. </p> <p>In 2015, Maths prodigy and another home-schooled girl Esther Okade became one of the United Kingdom’s youngest university students at the age of 10. She is studying a Maths degree with the Open University.</p> <p>14-year-old university graduate and Maths prodigy Yasha Asley became Britain’s youngest employee this year at the University of Leicester where he was admitted in 2014 straight from primary school at the age of 12 to study for a BSc degree in Mathematics.</p>