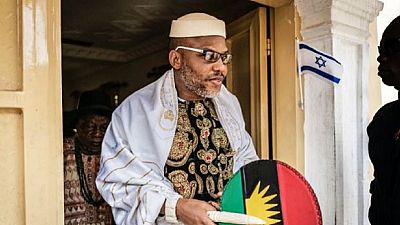 Leader of the Indigenous People of Biafra (IPOB), Nnamdi Kanu, has challenged the declaration by a Federal High Court that his group be proscribed and that it was a terrorist organization.

Kanu’s lawyer, Ifeanyi Ejiofor, argued that the court order labeling IPOB as a terrorist group was heard ex parte – i.e. without notice to the other interested party. A move he described as injurious to his client and therefore illegal.

In papers filed on Friday September 22 at a Federal High Court in the capital Abuja, Kanu’s lawyer said, IPOB was not a non-violent group and could not be said to be a terrorist organization.

The Nigerian government on Wednesday obtained a court order that allowed the pro-Biafra group to be tagged a terrorist and militant group.

Before the court declaration, the army last week slapped the terrorist tag on the group but the Army Chief said it was more of a pronouncement than a declaration. The U-turn came on the back of criticism that it was not for the army to declare one group or the other as terrorists.

Kanu was detained for over a year and half on charges of treason and was only released in April this year. He went missing after the military clashed with IPOB members at his home in Umuahia in Nigeria’s Abia State.

Kanu is pushing for a separate republic of Biafra nearly 50 years after a previous declaration of independence sparked a civil war which left more than a million people dead. Members of the group have occasionally clashed with Nigeria’s security apparatus during protests.