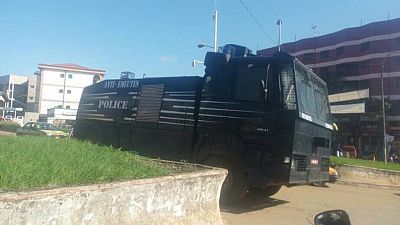 <h3>The Governor of the North-West Region of Cameroon has imposed a 24-hour ban on movement of persons in the region ending Friday midnight.</h3> <p>The order imposing the curfew did not state the reason. It follows a bomb attack in the main city Bamenda on Thursday that injured three police officers.</p> <p>“Movement of persons from one Division to the other in the North-West Region is hereby strictly prohibited for a period of 24 hours,” the Order issued on Thursday by the governor Adolphe Lele Lafrique stated.</p> <p>“Any person or persons who violate or attempt to violate this Order shall face the consequences as provided by the Law,” it added.</p> <blockquote class="twitter-tweet" data-lang="en"><p lang="en" dir="ltr">Escalation of <a href="https://twitter.com/hashtag/Cameroon?src=hash">#Cameroon</a> crisis. World needs to wake up, impending crisis <a href="https://twitter.com/UN"><code>UN</a> <a href="https://twitter.com/hashtag/UNGA?src=hash">#UNGA</a> <a href="https://twitter.com/UN_PGA"></code>UN_PGA</a> <a href="https://twitter.com/BBCAfrica"><code>BBCAfrica</a> <a href="https://twitter.com/AlJazeera"></code>AlJazeera</a> <a href="https://twitter.com/WSJ"><code>WSJ</a> <a href="https://t.co/EssmCyj3vx">pic.twitter.com/EssmCyj3vx</a></p>— Judith Nwana (</code>judithnwana) <a href="https://twitter.com/judithnwana/status/910970598511267841">September 21, 2017</a></blockquote> <script async src="//platform.twitter.com/widgets.js" charset="utf-8"></script> <p>The governor had said earlier on state TV that the bomb blast was a “terrorist attack”.</p> <p>Secession calls have been made by some inhabitants of the Anglophone regions who are accusing the government of marginalization and unfair distribution of wealth to the region.</p> <p>Late last year, series of protests were held against marginalization in the Anglophone regions.</p> <p>Anglophone teachers, lawyers and students were beaten and intimidated by the security forces during peaceful protests against the imposition of the French language on their schools and courts.</p> <p>Anglophone journalists also condemned a government order banning all radio and television discussions on the political situation in the region.</p> <p>President Biya subsequently signed a decree establishing the National Commission of Bilingualism and Multiculturalism to solve the matter.</p> <p>Rights groups have raised concerns about increasing repression under the 35-year-old rule of President Biya.</p> <p>In August, the president signed a decree releasing Anglophone leaders detained for months over last year’s protests.</p> <p>Several others are still behind bars including journalists who are facing terrorism charges.</p>