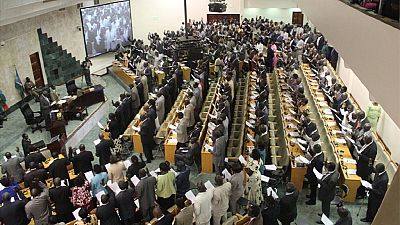 <h3>Four Members of Parliament and a minister in South Sudan’s Gok State were arrested for allegedly being absent at a parliamentary caucus sitting on Friday.</h3> <p>According to another MP John Marik Makur, the officials were arrested by the security services for failing to attend the sitting, he told local Eye Radio.</p> <p>“The members who have been arrested were in the town. Some of them went for private businesses; some to the hospital but did not know there was a sitting,” he was quoted by Eye Radio on Sunday.</p> <p>The officials include Minister of Physical infrastructure Ayen Maan Ador, the parliamentary chief whip Santino Manyiel Mading, and MPs Simon Mayar Marial, Malek Machot Padai, Ater Machar.</p> <p>John Marik Makur said the officials were not aware of the sitting and were arrested on their way home after having a misunderstanding with the State’s governor.</p> <p>The Speaker of Parliament Umjima Phili confirmed the arrests but told the media that they were detained for conducting an illegal meeting outside parliament.</p> <p>It is not clear if they have been released and if charges have been levelled against them.</p> <p>The Gok State is one of the restive areas in South Sudan where sporadic fighting takes place.</p> <p>South Sudan has been ravaged by civil war since 2013, after President Salva Kiir fired his deputy Riek Machar, who is currently leading the armed opposition.</p> <p>The conflict has killed thousands of people and driven more than 2 million from their homes.</p>