Liverpool's Senegalese forward Mane will not change style despite ban 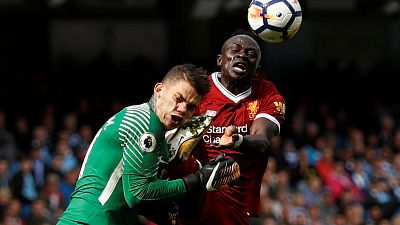 Liverpool’s Senegalese forward Sadio Mane regrets injuring Manchester City goalkeeper Ederson but will not change his playing style despite being sent off for the challenge which also resulted in a three-match ban.

Mane was shown a straight red card for a high studs challenge on the Brazilian goalkeeper’s head last weekend during his team’s 5-0 defeat by Manchester City.

He misses Burnley’s visit to Anfield on Saturday and will also be out of two games against Leicester City, one in the league and one in the League Cup.

Both players were involved in Champions League action in midweek, with Ederson recovering well to be in goal as City beat Feyenoord 4-0 while Liverpool drew 2-2 with Sevilla.

“I think the next time I will get the ball before him, I will do my best,” Mane told British media on Thursday.

“My intention was not to hurt the goalkeeper. It was bad and I wish him the recovery to come back healthy. I am happy for him that he could play again and help his team,” he said.

“I think it was a challenge for the ball. I made contact and it was not what I wanted to do so I apologised to him. It is part of football and I cannot change anything.”

Mane, who has scored three goals this season, could be replaced by Philippe Coutinho, who came on against Sevilla for his first appearance since asking for a transfer.

“It is always nice to welcome him back because he is one of our best players,” Mane said.

“He will not only help my game but I think he is a very important player for Liverpool and he will help us to get better and better.”