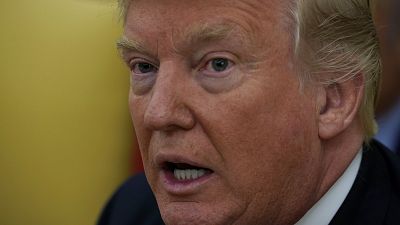 Donald Trump has said that military intervention in North Korea is “not inevitable” during a press conference with the Emir of Kuwait, saying that he would prefer not to see the crisis on the Korean Peninsula descend into armed conflict.

The US President, who praised Kuwaiti leader Sheikh Sabah al-Sabah for the Gulf state’s efforts in the fight against ISIL, reiterated, however, that military measures remain a possible course of action.

He also said that “we have very little to do in Syria but kill [ISIL]” but said he would not negotiate with reporters when asked whether he would accept a nuclear but contained North Korea.

Trump said: “Military action would certainly be an option. Is it inevitable? Nothing is inevitable. I would prefer not going the route of the military, its something certainly that could happen.

“Hopefully we are not going to have to see it on North Korea. If we do use it, it will be a very sad day for North Korea.”

Trumps comments come days after the secretive regime said it tested a powerful hydrogen bomb that can be loaded on to an intercontinental ballistic missile.

The explosion, which the head of South Korea’s parliamentary defence committee Kim Young-woo said had a blast yield of as high as 100 kilotons – equal to 100,000 tons of TNT – offers further evidence that North Korea is moving perilously close to developing a nuclear warhead capable of striking the continental US.