Why does Catalonia want independence from Spain? 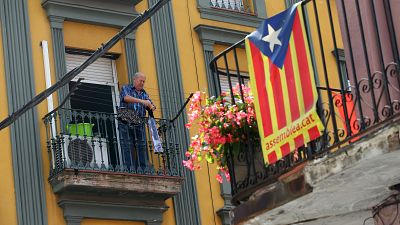 The Spanish national government is currently embroiled in a row with Catalonia over its calls for independence.

Much to the anger of Madrid, the Catalan regional government passed a law this week to hold a referendum on independence.

But why does the region want to break away from the rest of Spain?

Catalonia’s distinct history goes back to the early Middle Ages, with many Catalans considering themselves as a separate nation from the rest of Spain.

Today this feeling is manifested in Catalonia’s pride in its language and identity – not to mention the fierce rivalry between football teams FC Barcelona and Madrid in the El Clasico.

Located in Spain’s far-eastern corner, Catalonia is separated by the Pyrenean mountains from southern France, with which it holds close historical ties.

Until the birth of modern-day Spain in 1715, Catalonia was an independent region in the Iberian Peninsula – now Spain and Portugal – with its own identity, laws and customs.

Subsequent kings tried to impose Castilian Spanish and laws on the region, but gave up in 1931 and restored the national Catalan government, known as Generalitat.

From 1939 the Franco regime tried to suppress Catalan identity until the dictator’s death in 1975.

Spain’s return to democracy brought devolution for Catalonia, along with other regions.

Today Catalonia has its own parliament and executive and enjoys extensive autonomy.

But Catalan pro-independence parties have long been pushing for complete independence from the Spanish state.

In 2014 an informal vote found that 80 percent of those living in the region were in favour of independence for Catalonia.

Catalan politicians said the non-binding vote should pave the way for a formal referendum, sparking outrage from the central government in Madrid.

This year the Catalan regional government stated its intention to hold a ballot on independence on 1 October, which has been described as illegal by Spanish Prime Minister Mariano Rajoy.

Catalonia is one of Spain’s richest and most industrialised regions.

The region is home to Barcelona, a vibrant economic and cultural hub as well as a popular tourist destination.

Its thriving manufacturing, food-processing, metalworking and chemical industries, along with a growing service sector, make it Spain’s economic powerhouse.

In fact, secession would cost Spain nearly 20 percent of its economic output.

Spain’s economic crisis has fueled calls for independence, with many Catalans believing the affluent region props up poorer areas.

Catalonian independence would also trigger a row over how to split Spain’s deficit.

Catalonia and the rest of Spain are also divided linguistically between Catalan and Castilian.

Catalan, spoken in Catalonia, Valencia and the Balearic Islands, as well as the French region of Rousillon, is close to regional languages in southern France.
Standard Spanish, also known as Castilian, is spoken in the rest of Spain.

Catalan and Castilian are both official languages in Spain, with Catalan actively encouraged in education, official use and the media.

However, some tension has been caused by the rising influence of Castilian in capital of Catalonia, Barcelona.

Nearly all Catalans are bilingual, yet most other Spaniards do not learn Catalan.