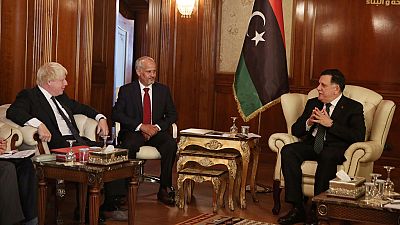 British Foreign Secretary Boris Johnson met Libyan commander Khalifa Haftar during a visit to Benghazi on Thursday and urged him to stick to a ceasefire announced in Paris last month and to back U.N.-led efforts to end Libya’s conflict.

Johnson’s visit is the latest show of growing Western recognition of Haftar, who has long been supported by Egypt and the United Arab Emirates for his anti-Islamist stance.

Haftar is the dominant figure in eastern Libya and since early last year has spurned the U.N.-backed Government of National Accord (GNA) in the capital, Tripoli, while making military gains on the ground.

The GNA, hampered by infighting and its failure to win endorsement from eastern-based factions, has largely failed to extend its authority or end the turmoil that developed after a NATO-backed uprising toppled Libyan leader Muammar Gaddafi in 2011.

Since 2014 Libya has had rival governments in Tripoli and the east. It has become the main departure point for migrants catching boats to Europe and it has seen Islamic State establish and then lose a regional stronghold in the coastal city of Sirte.

International efforts to broker a political deal have resulted in two meetings between Haftar and GNA Prime Minister Fayez Seraj, one in Abu Dhabi in May and the other in Paris in July.

At the Paris meeting the two men shook hands on a ceasefire and elections next year, though Haftar quickly played down the commitments.

Johnson met Haftar during a visit to the eastern city of Benghazi, where Haftar declared victory in early July after a three-year military campaign against Islamists and other rivals.

He said he had encouraged Haftar to back new U.N. envoy Ghassan Salame’s efforts to find a political settlement for Libya by revising the 2015 deal that created GNA.

“Field Marshall Haftar has a role to play in the political process,” Johnson said in a statement. “I urged him to adhere to the commitments he made during recent meetings in Paris, to respect a ceasefire, and to work with Mr. Salame in order to amend the Libyan Political Agreement.”

Haftar, who fell out with Gaddafi in the 1980s and lived for two decades in the United States, remains a divisive figure in Libya. His forces have replaced civilian mayors in many eastern cities and talked of “liberating” Tripoli. Critics have said they fear a return to military rule.

On Wednesday, Johnson made his second trip to Tripoli to meet Seraj. He also travelled to Misrata, a port city and major military power that has led opposition to Haftar.

“I have encouraged all sides to resolve their differences by dialogue, not conflict, and to respect international human rights law,” Johnson said.

Since the meeting in Paris, Haftar’s Libyan National Army has threatened to advance into the eastern city of Derna, and tightened a blockade around the city.

The International Criminal Court has also issued an arrest warrant for a commander in an elite Libyan National Army unit accused of executing dozens of prisoners in the closing stages of the Benghazi campaign.

The Libyan National Army has said it is investigating the case.