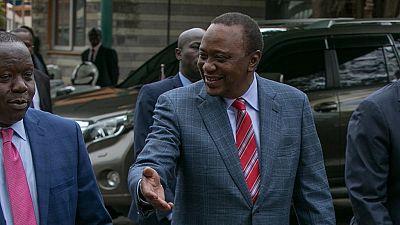 <p>Kenya’s President Uhuru Kenyatta rebuked newly elected members of parliament on Thursday for resisting modest cuts to their salaries and perks, worth more than $10,000 a month, and said citizens were angry with extravagance in the government.</p> <p>Kenyatta, whose Aug. 8 re-election is being challenged in the supreme court by opposition leader Raila Odinga, vowed not to assent to any law reversing the cuts to legislators’ wages, if the court upholds his victory.</p> <p>The issue is an emotive one in the East African country, where the minimum wage is equivalent to $100 a month.</p> <p>A lawmaker who sits on the parliamentary service commission, Gladys Wanga, told Reuters on Wednesday the cuts, which have already taken effect, would turn MPs into “beggars”, and vowed to oppose them when parliament restarts next week. </p> <p>Kenyatta told a televised meeting with headteachers: “I’m greatly disturbed by the remarks we have been hearing from yesterday of individuals who wish to claim that they should be paid more and they will demand more than what the law provides them.</p> <p>“Even as I wait for the Supreme Court to rule (on the election), if it rules in my favour, I’m saying before you, I swear I shall not sign that law.”</p> <p>The annual bill for paying 700,000 public employees, including elected leaders, stands at 627 billion shillings ($6.1 billion), which is equal to half of the government’s revenue.</p> <p>The Salaries and Remuneration Commission (<span class="caps">SRC</span>), which sets wage levels, said last month it would slash salaries of top officials, including the president and lawmakers, to save 8.5 billion shillings a year.</p> <p>The cuts include the scrapping of a 5 million shilling car grant given to every legislator, removal of certain allowances and a 90,000- shilling reduction in basic monthly pay.</p> <p>Kenyans have reacted angrily to lawmakers’ demands for the reversal of the cuts. They posted fiery messages on social media, threatening to recall their members of parliament, and forcing at least one MP who had protested the cuts to perform a U-turn on TV and say she would “humbly” accept the <span class="caps">SRC</span>’s decision.</p> <p>Many elected representatives lost their seats to newcomers and independents in the Aug. 8 election, and Kenyatta attributed that partly to voters’ disenchantment with profligacy.</p> <p>“It is shameful that we are barely a week away and they (legislators) have not recognised the issues that made Kenyans angry,” he said.</p> <p><strong><em>Reuters</em></strong></p>