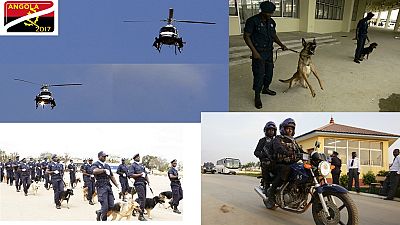 The Angolan police chief has announced the deployment of 120,000 air and ground security personnel around the country to ensure peace during the electioneering period.

Commissioner-General Ambrósio de Lemos told the African Union observer mission on Tuesday that the troops include 108,000 police officers and the rest from the special forces.

He also mentioned the deployment of vehicles, helicopters, dogs and horses for the security operation.

The Commissioner-General said the personnel have been well trained in handling security during elections and they will abide by the elections code of conduct.

4,570 security officials have been deployed to the Cabinda province which hosts the restive Cabinda city disputed by secessionists.

This was disclosed by the police commander of the area, Eusébio Domingos de Almeida e Costa, who said on Monday that they will ensure security during the elections and at the borders with neighbouring DR Congo and Congo Brazzaville, the Angolan news agency reported.

The African Union observer mission in Angola, led by former Cape Verdean Prime Minister José Maria das Neves, was impressed by the security arrangement and called for restraint in performing their duties.

Polls opened at 7am local time and 9.3 million people are expected to vote by the close of polls at 6pm local time.