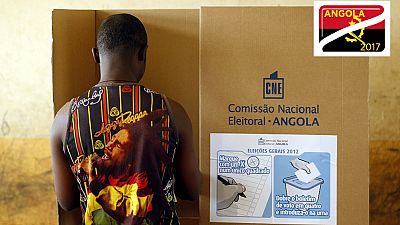 <p>Angolans will exercise their democratic rights on August 23 when they pick lawmakers and in the same vein elect a new president.</p> <p>The Southern African oil producer will for the first time in close to four decades have a new political leader. Angola will begin a post Jose Eduardo dos Santos-era after the upcoming polls.</p> <p>Dos Santos in his capacity as leader of the ruling <span class="caps">MPLA</span> steps down <a href="http://www.africanews.com/2017/02/03/angola-s-dos-santos-officially-confirms-retirement-after-38-years-in-charge/" target="_blank">after 38 years in charge. </a> The only other leader to have come to power in 1979 is Equatorial Guinea’s Teodore Obiang Nguema.</p> <h3><a href="http://www.africanews.com/2017/08/21/angola-picks-dos-santos-successor-here-are-the-six-contenders/" target="_blank">Angola votes: Here are the six men hoping to succeed dos Santos</a></h3> <p><img src="https://static.euronews.com/articles/38/41/384181/1024x576_bonus-AVContenders-Copy2.jpg" alt="" /></p> <h2>The 1992 historic multi-party elections</h2> <p>This is Angola’s fourth election since the return to multi-party democracy in 1992 after a years of civil war that ended with the signing of an accord in 1991.</p> <p>Candidate dos Santos at the time went neck-a-neck with ex rebel leader Jonas Savimbi in the presidential race even though the <span class="caps">MPLA</span> swept 129 of the 220 seats in parliament.</p> <p>Savimbi’s <span class="caps">UNITA</span> got 70 seats whiles the remaining was split among smaller parties at the time. The opposition strongly opposed the results at the time accusing the <span class="caps">MPLA</span> of fraud.</p> <h3> <a href="http://www.africanews.com/2016/12/03/africa-s-longest-serving-presidents-still-going-strong/" target="_blank">Africa’s longest serving presidents still going strong</a></h3> <h2>2008: First polls post-second civil war, ruling <span class="caps">MPLA</span> makes massive gains</h2> <p>No elections were held after 1992 till 2008 because of the outbreak of the second civil war. The war continued till 2002, after it ended, plans began to organize new elections – registration delayed due to logistical constraints but the vote held in 2008.</p> <p>The <span class="caps">MPLA</span> strengthened its grip on power whiles <span class="caps">UNITA</span> recorded heavy losses having lost over a third of their seats. They fell from 70 to 16 seats whiles the ruling party got 191 seats up from 129 in 1992.</p> <p>With Savimbi and his deputy killed in the course of the civil war, the onus fell on Isias Samakuva, who has led the party since 2003. He is a candidate in the August 23 polls – his third shot at the seat.</p> <h2>The 2012 elections – main opposition makes gains</h2> <p>In 2012 elections, fortunes seem to have turned as <span class="caps">MPLA</span> made losses while <span class="caps">UNITA</span> gained. The same number of seats were involved on both sides. Sixteen seats lost and 16 gained.</p> <p><span class="caps">MPLA</span> won 175 seats down from the 191 in 2008 whiles <span class="caps">UNITA</span> doubled its performance in 2008 by hitting 36 – a little over half of the 75 seats it held in 1992.</p> <p>The Angolan system since 2008 is such that the votes of the parliamentary seats determines who emerges president. In that case, leader of whichever party that wins parliament automatically becomes president of Angola.</p> <h3><a href="http://www.africanews.com/tag/africa-elections/" target="_blank">Click here for all the election news on our Africa Elections page</a></h3> <h3> Follow our <span class="caps">LIVE</span> coverage of the entire process in the stream below. </h3> <iframe src="//embed.scribblelive.com/Embed/v7.aspx?Id=2649200&ThemeId=19714" width="100%" height="1200" frameborder="0"></iframe>