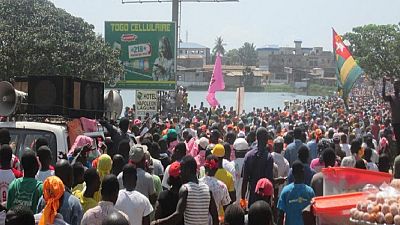 <p>Two protesters were killed and 13 others wounded in Togo on Saturday when security forces opened fire to break up demonstrations against the ruling Gnassingbe family dynasty, the security ministry said.</p> <p>President Faure Gnassingbe has been in power in the West African country since the death in 2005 of his father, Gnassingbe Eyadema, who had been at the helm for 38 years.</p> <p>Wearing the red colours of the opposition <span class="caps">PNP</span> party, chanting and singing “50 years is too long!”, thousands of demonstrators in the capital Lome called for the reinstatement of the constitution limiting terms that Eyadema introduced in response to protests in 1992.</p> <p>Security forces fired tear gas to disperse them.</p> <p>But in a parallel protest in Sokode, 210 miles (338 km) north of the capital, clashes erupted and Togolese forces used live bullets.</p> <p>The security ministry said that apart from the casualties among protesters 12 gendarmes had also been wounded.</p> <p>“We do not understand our little Togo,” said demonstrator Ali Boukari. “The father Eyadema was in power for 38 years, his son will soon have done 15 years. All we are demanding is a term limit and they shoot (tear gas) at us.”</p> <p>The 1992 constitution brought in notional multi-party democracy after decades of dictatorship, and limited presidential terms to two, but ten years later lawmakers amended it to enable Eyadema to run for another term – a common pattern in Africa.</p> <p>Then, when he died, the military effectively tore up the constitution by installing his son as interim president, instead of the head of the national assembly, as was legally required.</p> <p>The protests that followed Faure Gnassingbe’s first election victory in 2005 triggered a violent security crackdown in which around 500 people were killed.</p> <p>“We are protesting against the arbitrary nature of governance and denial of freedom to assemble,” <span class="caps">PNP</span> leader Tikpi Atchadam said.</p> <p><strong><em>Reuters</em></strong></p>