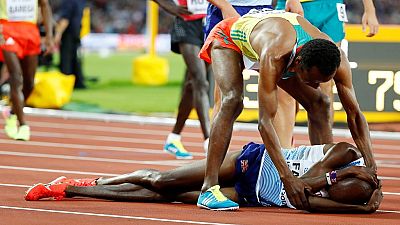 <p>Great Britain’s Mohamed Farah has now been defeated by two Ethiopians sandwiching his 10 gold medals in 5000m and 10000m fields.</p> <p>Farah has said team Ethiopia must have planned to see him out.</p> <p>In Daegu in 2011, Ibrahim Jeilan outran Farah on the final lap in the 10000m race. In London, it was 23-year old Muktar Edris, who defeated Farah amid thrilling chants from the crowd.</p> <p>The 2012 world U20 champion put up a stunning finishing pace in the final 300m, which Farah was unable to defeat, winning within 13:32.79.</p> <p>Edris avoided unnecessary surges, keeping in the sixth position in the first hundreds of meters in the race. Farah’s British teammate Andrew Butchart shot to the lead in the first 500 meters through to the first kilometer in 2:48.20.</p> <p>While Mo Farah was third, it was a comfortable pace for all the 14 athletes.</p> <p>At 1600 meters, Edris came to the front but soon relaxed maintaining a stable pace. Australia’s Patrick Tiernan then spurred up sprints, increasing his pace at 3000 meters but it didn’t last even a kilometer. </p> <p>Top runners Farah, Chelimo, Edris and other Ethiopians Yomif Kejelcha and Selemon Barega struggled for advantage positions to win the race.</p> <p>At half a kilometer to the finish, Edris and his team mate came to the fore as the bell rang for the final lap. They created a a two-metre lead with Farah striving to come first.</p> <p>Edris sprinted to the finishing line ending Farah’s dream of finishing his career a champion.</p> <p>“I was highly prepared for this race and I knew I was going to beat Mo Farah,” Edris told <span class="caps">IAAF</span> shortly after.</p> <p>Mo Farah still hopes to close as a legend in London.</p>