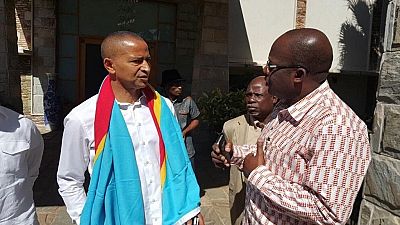 <p>Moise Katumbi, a presidential hopeful in the Democratic Republic of Congo (<span class="caps">DRC</span>) has given his backing to calls for protest against President Joseph Kabila.</p> <p>Pro-democracy movement Lucha called for protests today – Monday, July 31 – against the continued stay in power of Kabila whose constitutionally mandated second term ended in December last year.</p> <p>‘‘Congolese, this July 31st, let us all stand to save our country. Full support for the peaceful mobilization called by @luchaRDC!,’‘ the TP Mazembe bankroller and former governor of Katanga province tweeted over the weekend.</p> <blockquote class="twitter-tweet" data-lang="en"><p lang="fr" dir="ltr">Congolais, ce 31 juillet, soyons tous debout pour sauver notre pays. Soutien total à la mobilisation pacifique appelée par <a href="https://twitter.com/luchaRDC"><code>luchaRDC</a> ! <a href="https://t.co/o3k6H326oE">pic.twitter.com/o3k6H326oE</a></p>— Moise Katumbi (</code>moise_katumbi) <a href="https://twitter.com/moise_katumbi/status/891310061016018944">July 29, 2017</a></blockquote> <script async src="//platform.twitter.com/widgets.js" charset="utf-8"></script> <p><span class="caps">DRC</span> is in a political crisis occasioned by the failure of Kabila to step down after the expiration of his second term in office. A court ruled that he could stay on till elections are held. Even though voter registration is ongoing, the elections body says polls are unlikely to hold this year.</p> <p>Violence in other parts of the country has led to deaths and massive displacement. The opposition has called for resistance to Kabila’s continued stay in office. He has yet to state whether he will run in the next polls. </p> <p>A peace agreement by the African Union failed to hold till another one by the Catholic Church signed on December 31, 2016 gave a glimmer of hope. </p> <p>Failure to comply with terms of the deal plus death of leading opposition chief, Etienne Tshisekedi has deepened the political tension and uncertainty.</p>

Congolese, this July 31st, let us all stand to save our country. Full support for the peaceful mobilization called by Lucha DRC!