From Boko Haram captivity to the classroom, 42 Chibok girls graduate 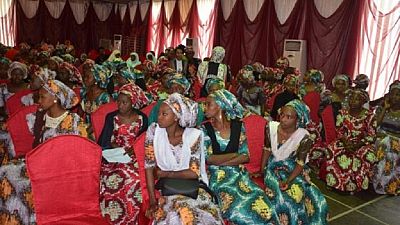 42 girls out of the first 56 girls who escaped Boko Haram captivity have graduated from secondary school on Tuesday.

The girls were sponsored to attend two private schools by the Borno State Government and a non-profit humanitarian organization, Girl Child Concern.

The schools are the Bethel International Christian Academy for Christian students and Ulul-Albab Science Secondary School for Muslim students in the Katsina and Plateau states respectively.

Governor Kashim Shettima attended the graduation ceremony where there were 34 other girls who are yet to graduate.

These girls were abducted on April 14, 2014 by the militant group Boko Haram from their secondary school in Chibok during a final examination.

The United Nations human rights committee on Monday called on the Nigerian government to step up efforts and rescue all women and girls abducted by Boko Haram and to ensure they return to school without stigma.

The government has hinted that more girls could be released by the Boko Haram insurgents as talks were still ongoing two months after 82 of the girls were released after negotiation with their abductors.

In October last year, some 21 girls were also released under a similar arrangement. The release was made possible by the assistance of the International Red Cross as ‘neutral intermediaries’ and the Swiss government.

The earlier release was without any known conditions but the more recent one was in exchange for five Boko Haram commanders. A decision the opposition slammed but which the government said it stood by.

The government continues its counter-insurgency on militants in the country’s northeast alongside talks for the release of all captives they are currently holding. The activities of the group threaten the entire Lake Chad region that spans parts of Cameroon, Niger and Chad.