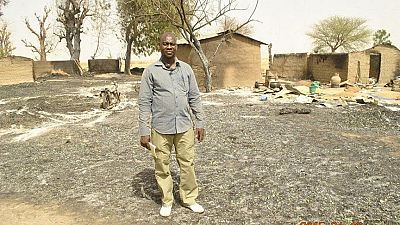 <h3>Radio France International’s Hausa service journalist Ahmed Abba who was sentenced to 10 years in prison this year by a Cameroon military tribunal has been named the 2017 International Press Freedom Award recipient.</h3> <p>The <a href="https://cpj.org/2017/07/cpj-announces-2017-international-press-freedom-awa.php" target="_blank">annual prize</a> is awarded by media rights body Committee to Protect Journalists (<span class="caps">CPJ</span>) to honour journalists who show courage in defending press freedom despite facing attacks, threats, or imprisonment.</p> <p>Ahmed Abba is the only African to be awarded the prize this year, which he jointly shares with Patricia Mayorga, a Mexican journalist; Pravit Rojanaphruk from Thailand; and Afrah Nasser, a Yemeni reporter and blogger.</p> <blockquote class="twitter-tweet" data-lang="en"><p lang="en" dir="ltr"><span class="caps">CPJ</span> International Press Freedom Award Winners:<br /> Ahmed Abba – Cameroon<a href="https://twitter.com/pmayorga_o"><code>pmayorga_o</a> - Mexico<a href="https://twitter.com/PravitR"></code>PravitR</a> – Thailand<a href="https://twitter.com/Afrahnasser"><code>AfrahNasser</a> - Yemen<a href="https://twitter.com/hashtag/IPFA?src=hash">#IPFA</a> <a href="https://t.co/Fhvr8OpnGz">pic.twitter.com/Fhvr8OpnGz</a></p>&mdash; CPJ (</code>pressfreedom) <a href="https://twitter.com/pressfreedom/status/887323222055809024">July 18, 2017</a></blockquote> <script async src="//platform.twitter.com/widgets.js" charset="utf-8"></script> <p>Abba, who was sentenced for “non-denunciation of terrorism” and “laundering of the proceeds of terrorist acts” was arrested on July 30, 2015 in Maroua, capital of the Far North region on suspicion of collaborating with Boko Haram and withholding information.</p> <p>He was reportedly held and tortured by Cameroonian authorities for three months before he was transferred to the capital Yaounde where he had been in prison for over 600 days.</p> <p>Amnesty International described the conviction and sentencing as an “unfair trial is a travesty of justice”.</p> <blockquote class="twitter-tweet" data-lang="en"><p lang="en" dir="ltr"><a href="https://twitter.com/hashtag/CAMEROON?src=hash">#CAMEROON</a>: Conviction and sentence of Radio France Internationale's journalist <a href="https://twitter.com/hashtag/AhmedAbba?src=hash">#AhmedAbba</a> is a travesty of justice<a href="https://t.co/D6rpLW0ql9">https://t.co/D6rpLW0ql9</a> <a href="https://t.co/vNmB5tCvt1">pic.twitter.com/vNmB5tCvt1</a></p>— Amnesty West Africa (@AmnestyWARO) <a href="https://twitter.com/AmnestyWARO/status/856589777247797248">April 24, 2017</a></blockquote> <script async src="//platform.twitter.com/widgets.js" charset="utf-8"></script> <p>He was convicted in April 2017 on the charges, but acquitted of the charge of “glorifying acts of terrorism.”</p> <p>Abba was also fined 55,726,325 <span class="caps">CFA</span> francs (over $90,000) or face five extra years in prison in default of payment.</p> <p>He however escaped the controversial death penalty adopted by Cameroon in its December 2014 anti-terrorism law reserved for perpetrators or accomplices of terrorist acts.</p> <p>Ahmed Abba is one of dozens of journalists who have won the award since its inception in 1991.</p> <p>“Journalists around the world face growing threats and pressure. Those we honor are the most courageous and committed. They stand as an example that journalism matters,” said <span class="caps">CPJ</span> Executive Director Joel Simon.</p> <p>This year’s winners will be honoured at an awards dinner in New York City on November 15, 2017.</p>