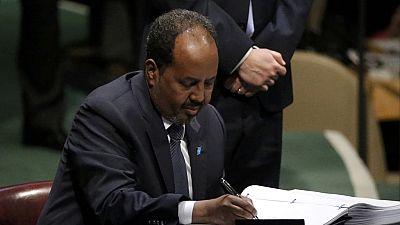 <h3>Somalia’s government has approved a monthly retirement income of $40,000 for former Somali President Hassan Sheikh Mohamud.</h3> <p>The cabinet gave its approval last week after a meeting over the retirement package of the former president who is currently living in Tanzania.</p> <p>The amount is expected to cover security, living and travel expenses as well provision for family members, local media <a href="http://radiodalsan.com/en/ex-president-mohamud-to-receive-40k-a-month-retirement-package/" target="_blank">report</a>.</p> <p>Minister of Information Abdirahman Osman disclosed the decisions taken after the cabinet meeting on his Facebook page which includes the approval of an amended media law and new laws against terrorism.</p> <p>Former President Hassan Sheikh Mohamud’s approved income and other cabinet decisions have been forwarded to Parliament for approval, the minister added.</p> <blockquote class="twitter-tweet" data-lang="en"><p lang="en" dir="ltr">Somali cabinet today approved the amended Media Law which will be forwarded to the Parliament soon <a href="https://t.co/olKKEJAzvi">pic.twitter.com/olKKEJAzvi</a></p>— Abdirahman O. Osman (@engyarisow) <a href="https://twitter.com/engyarisow/status/885614440388993025">July 13, 2017</a></blockquote> <script async src="//platform.twitter.com/widgets.js" charset="utf-8"></script> <p>Hassan Sheikh Mohamud lost the February 8 elections held in a hangar at the Mogadishu international airport. </p> <p>The current president Mohamed Abdullahi Mohamed Farmaajo won the second round of voting in which 275 parliamentarians and 54 senators cast ballots.</p>