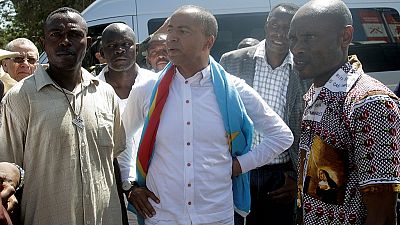 <h3>Self-exiled opposition leader of the Democratic Republic of Congo, Moise Katumbi, has called on Congolese to hit the streets and ensure President Joseph Kabila is removed from power.</h3> <p>He made the remark in an interview published by pan-African news analysis <a href="http://africanarguments.org/2017/07/17/an-interview-with-moise-katumbi-dr-congos-would-be-president/" target="_blank">website</a> African Arguments on Monday in which he said he will join the people to protest when he returns to the country.</p> <p>“I’m also going on the streets and will encourage the people, because today people are dying and no serious investors have come to the country since 2016,” he said.</p> <p>Katumbi did not disclose when exactly he will return to the DR Congo but says it will be “as quick as possible”.</p> <p>“I went with my lawyer to the High Commission for Human Rights in Geneva and got a good answer, so I’m definitely going back. I miss my country and my people … The date is soon. I’m like a general. I need to plan everything properly,” he said.</p> <p>The former Governor of Katanga Province has been in a self-imposed exile in Belgium after he was convicted and later sentenced in absentia to 36 months in prison and a fine of $6 million in a property appropriation case which he described as political distractions.</p> <p>Katumbi left the <span class="caps">DRC</span> to South Africa before he flew to Europe to seek medical treatment after inhaling tear gas fumes fired by police when he appeared before a Lubumbashi prosecutor with his supporters to answer to charges of hiring mercenaries to overthrow the government.</p> <p>He filed a legal complaint with the U.N. High Commission for Human Rights in June hoping to get international protection if he returns to run in a future presidential election.</p> <p>“Kabila is attacking me – only me – because he knows in the first round I will win the elections,” he said, adding that he is different from the president because he only served the legal two-term limit as Governor of Katanga.</p> <p>When asked about a possible alliance with businessman Sindika Dokolo, the Congolese son-in-law of Angolan President Eduardo dos Santos, who has been sentenced to a year in prison in absentia for real estate fraud like Katumbi, he said all of Congolese will join forces to bring change to Congo.</p> <p>“Not just the two of us. I was with Sidika Dokolo and Félix Tshisekedi. It’s all the Congolese people, civil society, everyone. We need real change. Congolese people today are determined. I have met a lot of Congolese children born in Europe who want to go back and contribute,” he said.</p> <p>Kabila, in power since 2001, refused to step down after his mandate expired in December. Under a deal struck with his opponents, an election must take place by the end of 2017.</p> <p>Doubt has been cast over the indefinite timeline after the electoral commission announced that it is not possible to hold the election this year.</p> <p>Congo has never experienced a peaceful transition of power. The overthrow of longtime ruler Mobutu Sese Seko in 1997 fueled years of conflict in the mineral-rich east that sucked in more than half a dozen countries and killed millions of people.</p>

I went with my lawyer to the High Commission for Human Rights in Geneva and got a good answer, so I’m definitely going back. I miss my country and my people.