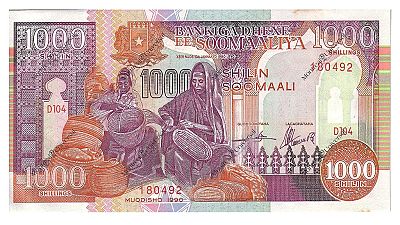 After Islamist group al Shabaab’s ban on the Somali Shilling in the central and southern regions under its control over alleged influx of fake notes, some traders are reported to have resorted to the use of Ethiopian Birr.

According to a report by Somalia’s Dalsan Radio in Mogadishu, traders in Galmudug are using the Ethiopian currency in respect of the instructions.

Business in the central Somalia’s region of Hiiraan also stalled last week following the ban of the 1000 Shilling banknote which is the only Somali currency in circulation.

The order follows reports that the semi-autonomous state of Puntland had printed and circulated counterfeit banknotes to float the exchange rate between the dollar and shilling.

The Puntland authorities responded to the allegations and ban in a statement saying the militant group wants to “devalue the Somali shilling and empowering the foreign currency”.

“Puntland government warns business owners in Puntland against following the ban on the Somali shillings. Anybody found complying Al-Shabaab ban will be considered as a member of them and will face consequences,” the statement cited by local media said.

Some residents are reported to have staged protests outside shops over refusal to accept the Shilling.

Puntland is partly under the control of al Shabaab.