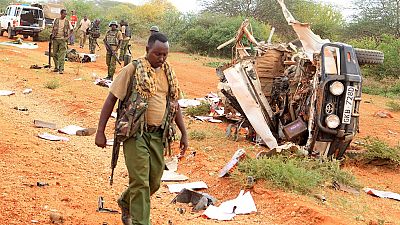 A senior Kenyan government official was taken hostage with five other people by suspected Islamist militants who attacked the vehicle they were travelling in on Thursday, a military spokesman said.

Maryam El Maawy, from Kenya’s ministry of public works, and three of the party were rescued by military personnel – but the driver and another person were killed during the operation.

The vehicle “rolled and burst into flames during the attack”, Owuoth said, adding El Maawy had been taken for medical attention at a hospital and the plan was to airlift her to the capital, Nairobi.

Owuoth said the Islamists had escaped to Boni, a forest in the area where they are believed to have a hideout.

On Monday, the Kenya military said it had launched aerial bombardments on the forest after a string of attacks by suspected militants in the area.

Al Shabaab is fighting to overthrow Somalia’s Western-backed government and establish its own rule, based on the group’s strict interpretation of sharia law.

The Islamists frequently launch attacks on Kenyan soil which they say are intended to force the country to withdraw its troops from Somalia.