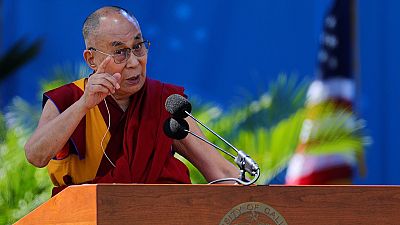 China warned Botswana on Friday against hosting the exiled Tibetan spiritual leader the Dalai Lama, who is due to visit there next month, saying it hoped Botswana could make the “correct” decision about the trip.

The Dalai Lama is expected to address a human rights conference in the capital, Gaborone, on Aug. 17-19 and will also meet Botswana’s president. China is a major investor in Botswana’s economy.

Chinese Foreign Ministry spokesman Geng Shuang told a daily news briefing that the Dalai Lama wears the cloak of religion to engage in anti-China, separatist activities and China opposes any foreign official meeting him in any form.

“We hope the relevant country can clearly recognise the essence of who the Dalai Lama is, earnestly respect China’s core concerns, and make the correct decision on this issue,” Geng said. He did not elaborate.

The Dalai Lama, who fled from Tibet into exile in India in 1959 following a failed uprising against Chinese rule, has long been at loggerheads with China, which brands him a dangerous separatist.

The Dalai Lama, who won the Nobel Peace Prize in 1989, says he seeks greater rights, including religious freedom and genuine autonomy for Tibet.

Visits by the Dalai Lama to foreign countries infuriate China.

It often retaliates by stopping high-level meetings or taking economic steps, like last year when it imposed new border fees following a visit by the Dalai Lama to Mongolia.

Botswana’s neighbour South Africa has denied a visa to the Buddhist monk three times since 2009 in what opposition parties there, and Archbishop Desmond Tutu, say shows the extent of Beijing’s influence over Pretoria.

China’s fast-growing demand for raw materials has made it one of the biggest investors in Africa and its largest trade partner. Chinese state-owned companies have been awarded contracts to build roads, dams, power stations and airports in Botswana.