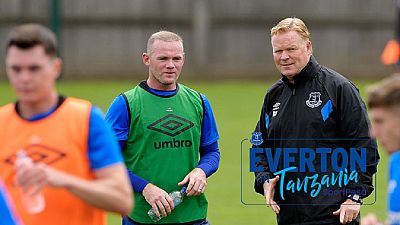 Former Manchester United and England skipper, Wayne Rooney will play 45-minutes of his new club’s friendly fixture in Tanzania on Thursday, the Everton manager has confirmed.

According to Ronald Koeman, his team are prepared for the game against Kenya’s most successful side, Gor Mahia as they look to kick off their pre-season fixture schedule.

A statement on the club website read, “Koeman revealed each of the travelling party – which includes a whole host of new faces including latest signing Wayne Rooney – will play 45 minutes against Gor Mahia as they look to build their fitness levels.”

The game will be played at the 60,000-capacity National Stadium in Dar es Salaam on Thursday. The Premier league side are in Tanzania as part of their new partnership with sponsors SportPesa, and the players will also be out within the local community getting to know the culture of the East African country.

Rooney rejoined Everton, his boyhood club and from where he transferred to Manchester United, he spent 13 years at Old Trafford in what was seen as a very successful period.

He rejoined the Merseyside club just when Manchester signed their lead striker, Belgian Romelu Lukaku for a fee believed to be around $75 million.

The 31-year-old, who has moved to Goodison Park for an undisclosed fee, spoke of his excitement at returning to a club where he began his career after coming through the youth ranks.

Rooney joined United from Everton for £27m on the back of stunning displays at Euro 2004 and went on to win five Premier League titles, four League Cups and the 2015-16 FA Cup on his way to a personal tally of 253 goals.