Rwanda tops UN list of countries with most women in parliament 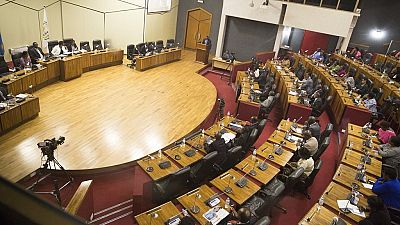 Rwanda has been ranked highest country in the world with most women in parliament as of January 2017.

Rwanda is followed directly by Bolivia, Cuba and Iceland.

Worldwide, only Rwanda and Bolivia have as many women as men in their parliament. Download 2017 #womeninpolitics map https://t.co/KGEV4IOPwc pic.twitter.com/TRXxFWHodL

The African countries that made it in the top 20 include Senegal, South Africa, Namibia, Mozambique, Ethiopia and Angola, ranking 7, 9, 12, 13, 17 and 19 respectively.

No African country made it in the two least categories. Nigeria however placed 180 in the 190 ranking.

The map, showing global rankings for women in the executive and parliamentary branches of government, also ranked Rwanda at 7 in the world with 9 women occupying the 19 ministerial positions in the country.

They still maintained the lead in Africa followed by South Africa, Uganda, Zambia and Mauritania, ranking 9, 19, 23 and 27 respectively.

The United Nations Entity for Gender Equality and the Empowerment of Women (UN Women) said there was slow progress towards gender equality at regional and national levels.

“The 2017 edition of the map shows a slight drop in the number of countries with a woman Head of State and/or Head of Government from 2015 figures (from 19 to 17),” it said in a statement.

“However, the data reveals a significant increase in the number of countries with a woman Head of State and/or Head of Government since the IPU-UN Women Map’s first edition in 2005 (from 8 to 17).,” it added.

Rwanda heads to the polls on August 4 with an all-male candidates contesting for presidency.

The only female aspirant, 35-year-old Diane Shima Rwigara was disqualified by the NEC for not meeting the requirements as a candidate.

Electoral campaigns will begin on July 14 followed by the elections on August 3 in the diaspora and August 4 in Rwanda.