Football for Friendship 2017: kids kick the ball to change the world 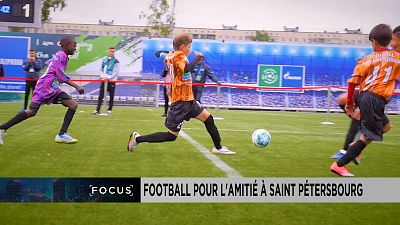 12 years old boys and girls from 64 countries came to St. Petersburg to take part in the fifth edition of the Football for Friendship program organized by Gazprom. Those youngsters believe, if you want to change the world for the better just kick the ball.

Pakistan and India, Egypt and Iran, Syria and Turkey: united in the International teams of Friendship those kids show that different cultures, languages and traditions are not an obstacle for the fair play. And every single player came to Russia with a big dream.

Defender from Mohammad Yusuf from Pakistan playing with his yellow team :

“I’ll make a team of Pakistan and I will surely be famous like Christiano Ronaldo”.

This time the trophee has gone to the Orange team, but every single F4F participant got the main prize – tickets to the FIFA Confederations Cup final. They also got a chance to meet some famous players.

The F4F ball passed by the best highlights of the Northern Russian capital, young players visited the city and learned the culture of the country which just a couple of days ago seemed like another planet to some of them.

May be those kids one day will become football stars, but fro sure, the light of this experience will show them the way into the better world.