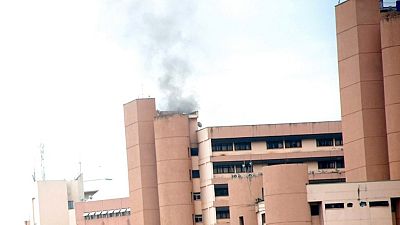 A fire broke out at the Federal civil service secretariat, Abuja, Nigeria, in the early hours of Saturday.

According to the Punch news paper, the fire was seen by security personnel after it had destroyed some office equipment.

Witness says the fire started early this morning and believe it was from the Ministry of Health within the secretariat.
Speaking on the incident, Idriss, director-general of the Federal Capital Territory (FCT) emergency service, said the damage done was not much.

“We suspect that the fire was from an electrical spark, but everything is under control, the fire has been put off, and the damage wasn’t much,” Idriss said.

Firefighters are said to be on to quench the flames.