Will Germany vote on gay marriage this week? 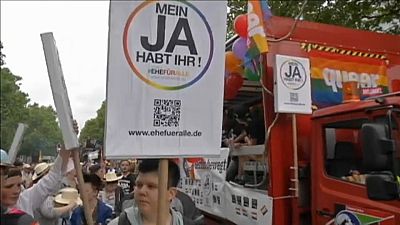 Germany’s Social Democrats (SPD) are pushing for a vote this week to legalise gay marriage.

SPD leader Martin Schulz says his party will push for a vote in parliament this week, before the start of the summer recess.

“I hope our colleagues in the conservatives will cooperate,” he said, raising the pressure on his conservative partners who want a vote after the election.

Why are they doing this?

Analysts say the SPD is hoping to capitalise on a surprise shift from conservative Chancellor Angela Merkel, three months before the country’s national election.

Polls have put Merkel’s conservatives 10-15 points ahead of the SPD, but short of a parliamentary majority.

The issue of gay marriage became a hot election topic after Merkel’s three potential coalition partners, including her current SPD partners, made it a condition for sharing power.

The SPD, pro-business Free Democrats (FDP) and the Greens have made gay marriage – a step-up from same-sex civil partnerships which have been allowed since 2001, a condition for a tie-up.

This effectively forced her hand.

Schulz needs to make up ground for his centre-left party in the election race and has sharpened his attacks on Merkel.

However, he has made it clear he will not end the coalition.

What did Merkel say?

Speaking at an event on Monday evening, the chancellor said she had taken note of other German parties favouring same-sex marriage and would allow a free vote.

“I would like to lead the discussion more into a situation where it is a question of conscience rather than something I push through with a majority vote,” Merkel said.

How will the vote play out?

With broad support among Germans for gay marriage, the law is likely to get easy approval in the lower house of parliament if conservatives can vote according to their conscience and not face a party whip.

Is there likely to be opposition?

Yes. The move could antagonise some in Merkel’s traditionally Catholic conservative bloc.

Her conservatives have already accused Schulz of acting irresponsibly.

“That is a breach of trust,” said Volker Kauder, the head of Merkel’s conservative bloc in parliament.

The SPD’s behaviour on such a sensitive topic shows it is “not suited to government”, he added.

What are campaigners saying?

They have welcomed Merkel’s change of attitude but also describe it as “a face-saving measure”.

“After 15 years of an ideological blockade, social pressure and the commitments of other parties have made an impact,” said LSVD spokesman Axel Hochrein.

“Equal rights for all people is part of our constitution.”