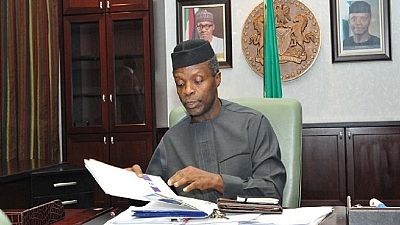 <p>Nigeria’s acting president met with regional leaders in an effort to quell ethnic tensions, his office said, as threats grow of conflict between northern Muslims and southeastern Igbo people.</p> <p>The two groups have been trading barbs since the beginning of the month, after Muslim activists demanded the eviction of Igbo from the north over their calls for a separate southeastern state, known as Biafra.</p> <p>The expulsion notice is an echo, 51 years later, of the anti-Igbo pogroms across the north that helped spark the secession of Biafra in 1967. The resulting civil war ended with Nigeria’s victory in 1970, after an estimated 1 million people died.</p> <p>“There is a point where a line has to be drawn, and that is when conversations or agitations degenerate into hateful rhetoric, where the narrative descends into pejorative name-calling, expressions of outright prejudice and hatred,” said Yemi Osinbajo, Nigeria’s acting leader, according to a statement late on Thursday.</p> <p>Osinbajo met with leaders from the north and southeast, state governors and media publishers and editors, the statement said.</p> <p>“It will be wrong of us to approach our grievances by threatening to disobey the laws or by threatening the integrity of our nation,” Osinbajo told leaders.</p> <p>Nigeria is no stranger to ethnically charged violence. Deadly clashes between Muslim herders and Christian farmers have erupted in recent years, partly over land use in the region known as the Middle Belt.</p> <p>In the eastern state of Taraba, part of the Middle Belt, 10 people have died since last week in ethnic clashes, a police spokesman said.</p> <p><strong><em>Reuters</em></strong></p>