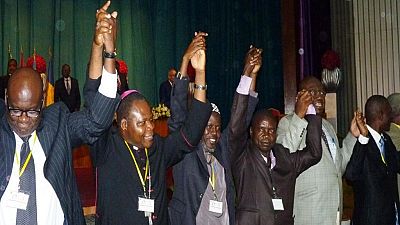 <p>The government of the Central African Republic and 13 of the 14 armed groups in the country on Monday signed an accord aimed at ending an ethnic and religious conflict that has killed thousands of people. </p> <p>The deal, which was mediated by the Roman Catholic Sant’ Egidio peace group, calls for an immediate end to hostilities and the recognition of legitimate authorities following the last elections. </p> <p>This is the latest of several peace accords signed by rebel groups and the government since the conflict started.</p> <p>In 2015, an agreement was signed between 10 armed groups and the Defense Ministry during a peace forum in the capital, Bangui, requiring them to disarm and potentially face justice for war crimes committed during two years of conflict.</p> <p>Another ceasefire agreement was signed in 2014 in Brazzaville under the auspices of the African Union. They were all shortlived.</p> <p>The country has been plagued by inter-religious and inter-communal conflict since 2013, when the mainly Muslim Seleka rebels seized power, prompting reprisals from the anti-Balaka militia, many of whose fighters are nominally Christian.</p> <p>The conflict has killed thousands and displaced nearly a million people in the impoverished former French colony.</p>