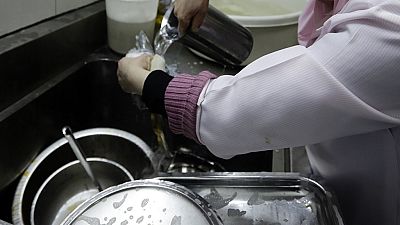 <h3>412 Algerian women broke the Guinness World Record on Friday for the largest number of people washing dishes at the same time. </h3> <p>In the presence of an official judge from the world’s authority on record-breaking achievements, the 412 young women each washed two plates at the end of a charity meal offered in Algiers by a dish washing liquid brand, <span class="caps">AFP</span> reports.</p> <p>“You are officially extraordinary!”, announced the judge, Hoda Khachab, who came from Dubai. </p> <p>He announced the officially beaten record after having duly counted the competitors and verified the cleanliness of the plates. </p> <p>The new record was set at a solidarity evening titled “Tahla Lemma” (“the joy of meeting” in Arabic), during which approximately 1,000 meals were served to orphans, the elderly and university residents on the occasion of the iftar (dinner for the breaking of fast during the month of Ramadan). </p> <p>This is the second Guinness World Record broken in Algeria, after 6 tonnes of couscous – the largest in the world – was cooked in Algiers on June 3, 2004.</p> <p>According to the Guinness Book of World Records, the previous record was as far back as November 15, 2016 when 300 people had simultaneously washed dishes in the Philippines during an event organized by a major household and hygiene product manufacturer.</p>