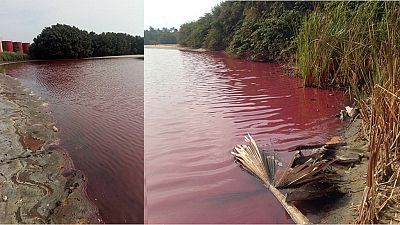 Gambia’s first Community Wildlife Reserve in the village of Gunjur, 35 kilometers from Banjul is facing depletion as its stream has turned red and wildlife found dead.

“The locals think it might be a toxic which is used in the factory. While fearing for their health, the local environmentalists managed to fill a plastic bottle as a sample for research. With tears in their eyes they shot some pictures and went back home,” they added with pictures showing the damage.

The result of the sample is not yet available to determine the actual cause of the red water and dead wildlife.

The same company is also accused of disposing off suspected toxic waste into the sea via pipes, resulting in the washing ashore of dead fish along the coastline.

Members of the community and environmentalists held a demonstration after the incident, calling on the government to relocate the Chinese company as well as stop the building of a similar company in nearby village of Kartong.

People protesting for their future! Stop #overfishing and polluting by #China investors in #Gambia now! The world is watching Greenpeace pic.twitter.com/kK4EybVUml

“What we found out was that some fishermen were using wrong fishing gears to capture juvenile fish from the coastal waters. They decided to dump the fish in the coastal communities of Gunjur and Kartong. We were able to apprehend who did this and they have been told to clear all the fish and take it to the right dumping site,” Gomez was quoted as saying.

“All the studies were done before the authority was given for them to start that factory. So, do you think my brother, any government would just sit and when a group come and say we don’t want this in this area and let move it to another place? And another group say let remove it and move it to another place. I don’t think you will advise any government to do that,” he added.

A petition campaign has been started with over a thousand people calling on President Adama Barrow to intervene and stop the activities of the Chinese company accused of pollution.

It is reported that the Chinese Embassy in The Gambia has visited the polluted site in Gunjur on a fact-finding mission.

It was declared a wildlife reserve in 2008 and protected by the Gunjur community after its delicate ecosystem started facing gradual damage caused by human activity.