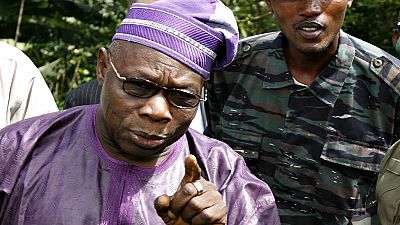 Former Nigerian President Olusegun Obasanjo has blamed the government of pushing Boko Haram into violent extremism after ignoring demands from the onset of the sect.

He referred to the days of the founder of the group Mohammed Yusuf when a court ordered the government to pay Boko Haram members compensation which was ignored, local media report.

“He knocked at the door and the door was not opened, he went legal, some of his followers went legal, they got compensation government did not pay, their members were being hunted and hounded, so they went into violence and that violence has festered to what we have today,” Obasanjo said at an anti-violent extremism workshop in the capital Abuja.

He bemoaned the escalation of insurgency in the northeastern part of the country which he attributes to high cost of living and the use of the “carrot and stick” approach to curb extremism.

He knocked at the door and the door was not opened, he went legal, some of his followers went legal, they got compensation government did not pay, their members were being hunted and hounded, so they went into violence.

“When he was confronted with the poverty and lack of job opportunity for his followers, he decided to try and find solution … What were the solutions he found? Hate preaching and being lawless within the community,” he added.

Boko Haram was founded in 2002 by Mohammed Yusuf to seek the establishment of an Islamic state in Nigeria and the “ban of western education”.

Yusuf was killed in 2009 during a violent uprising by the growing group after a confrontation with the police.

The violence escalated after the killing of their leader by the police resulting in a mass prison break and attacks in Maiduguri where they were based.

The attacks heightened under the leadership of Abubakar Shekau leading to the death of more than 15,000 people and forced two million to flee their homes, many of whom have moved to camps because it has been too dangerous to return home.

The group attacks villages and kidnaps girls and women who are used for suicide bombing targeting, public places, government buildings and security officials.

Nigeria’s war against the insurgency has pushed the group deep into the Sambisa Forest which is regularly attacked by the Nigerian army.