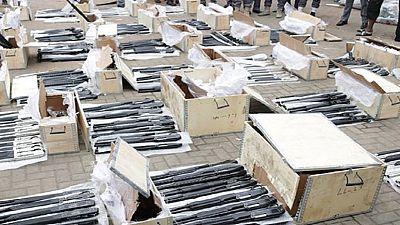 Nigeria’s custom authorities on Tuesday intercepted a 20-foot container loaded with 440 arms and ammunition of various sizes and designs, the Nigeria Customs Service has said.

The assistant Comptroller-General of Customs, Monday Abueh, said the arms were shipped from Turkey, adding that a suspect had been arrested in connection with the seized arms at Tin-Can Island port in Lagos.

According to Mr. Abueh, the intercepted 440 pieces of pump action rifles were manufactured in the United States of America and Italy.

“They are pump action rifles of various designs and also the single barrel device that you are familiar with,” Mr. Abueh told news reporters.

“We have arrested one defendant but due to security reasons, we don’t want to make it public for now because such information could hamper investigations which are still ongoing,” he added.

Mr Abueh further revealed that the container was intercepted even before declaration as investigations were ongoing to uncover the shipper.

The consignment, according to the custom authorities, was declared as white cement to cover up the illicit import.

Nigeria have been hit by insecurity threats mainly from Boko Haram Jihadists fighters. The national government has put in place measures to counter any terror activities including placing control units to tackle arms flow in the conflict hit regions.