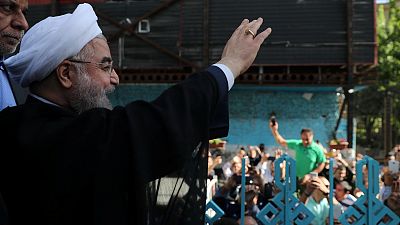 Some 40 million people turned out to vote, or around 70 percent of the electorate.

In results announced after 26 million ballots had been counted, Rouhani appeared set for a second term, with around 56 percent of the vote.

The campaign was hard-fought, but it wasn’t reflected in the preliminary tally.

The hardliner accuses Rouhani of mismanaging the economy and of selling out the values of Iran’s Islamic revolution to its enemies.

Rouhani, a moderate, struck a deal with world powers to curb the country’s nuclear programme in return for sanctions relief.

The winning candidate needs to gain more than 50 percent of the vote, to avoid a run-off between the top two in a week’s time.