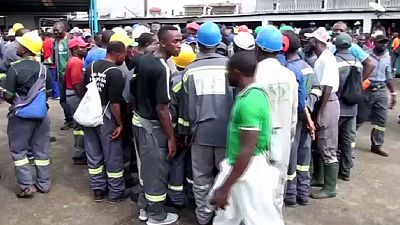 About 200 workers demanding better pay and conditions stopped anyone entering or leaving the site in Douala.
Around 3,000 tonnes of cocoa and 12 tonnes of coffee were held up.

“Our comrades died yesterday in the hospital because of a non-follow-up,” one of them complained, “and we are deducted 5,200 CFA francs a month per person for for insurance .We are 4,000 dockers. But when we go to our hospital we only get paracetamol and ibuprofen, and when someone spends two weeks in the hospital, they say your quota is over.”

Protests have been mounting against President Paul Biya’s 35-year rule over the central African nation, the world’s fifth-largest cocao producer, before general elections scheduled for next year.

Expectations of bumper cocoa crops around the world have raised the prospect of a large global surplus this season and sent prices plummeting.