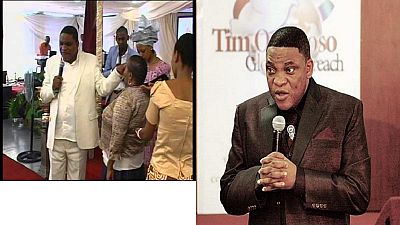 A Nigerian pastor wanted for alleged sexual assault and human trafficking of young women from his church has been arrested by South African police upon arrival at the Port Elizabeth Airport.

The 58-year-old Durban televangelist Pastor Timothy Omotoso of the Jesus Dominion International was picked up on Thursday by armed policemen at the Port Elizabeth Airport toilet minutes after his plane landed from Durban, local media Herald LIVE reported.

“After we got information that his flight was delayed, we did not just believe at first value. We took an initiative as the hawks to go to the airport ourselves. Only to find that the flight was on scheduled time, and when we had to get to our man, he did not use the way we thought he will use,” police spokesperson Lieutenant- Colonel Robert Netshiunda told the media.

We had to go after him. We arrested him for trafficking in persons, we are laying that charge now, but because we might investigate further, there is a possibility of us adding more charges on to that one.

The popular pastor has been in the news in the past week after the police in Port Elizabeth opened an investigation into allegations that he has been sexually abusing minor congregants in his home in Mhlanga, north of Durban since 2002.

About 30 girls made the claims which were aired on state broadcaster SABC on Monday alleging among others that he travels with young women and sexually abuses them on the trips.

Tonight on Special Assignment, we focus on a pastor who is alleged to have sexually abused young women in his church. 21h00 on SABC3 pic.twitter.com/Uo3ciQnCqy

“We had to go after him. We arrested him for trafficking in persons, we are laying that charge now, but because we might investigate further, there is a possibility of us adding more charges on to that one,” Netshiunda said.

After attempts to arrest him failed, Pastor Omotoso agreed to hand himself over in Port Elizabeth where he was handcuffed at the airport and detained at the police station ahead of a court appearance on Friday.

“He did not want to come to Port Elizabeth because he thought he would be arrested, but we said it would just be an interview … There was no talk about an arrest as he is not an accused, only a suspect,” his lawyer Terry Price was quoted to have said.

The church is reported to have over 20 branches in South Africa including branches in the United Kingdom and France.