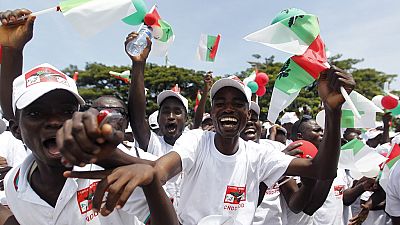 The United Nations has raised alarm over chants by the youth wing of Burundi’s ruling party CNDD-FDD calling for opponents to be impregnated or killed.

The chants captured on video and circulating on social media shows over a hundred young men from the Imbonerakure militia at a rally in the Ntega commune of the Kirundo province in northeast Burundi repeatedly chanting “make opponents pregnant so that they can give birth to Imbonerakure”.

“The grotesque rape chants by the young men […] are deeply alarming – particularly because they confirm what we have been hearing from those who have fled Burundi about a campaign of fear and terror by this organized militia,” he said in a statement.

OHCHR noted a statement by the ruling party condemning the chanting but added that reports indicate the similar rallies have been organized by senior government officials across the country.

“[The] condemnation is meaningless if, instead of a putting a stop to such events, senior Government officials continue to take part in such rallies … Such blatant and brazen hate speech and incitement to violence must not be tolerated, nor encouraged,” Zeid warned.

The video in question also shows another group repeatedly shouting about 19 times that the opponents “should die”, OHCHR noted.

Over 400,000 people have fled Burundi over the last two years fearing for their safety, the UN estimates.