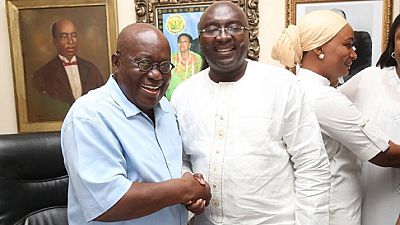 The President Nana Addo Dankwa Akufo-Addo-led government of Ghana boasts of fulfilling over a hundred campaign promises in the first 100 days of its tenure since it won the December 7 elections last year.

The “achievements” were highlighted by the Vice President, Dr. Mahamudu Bawumia at a town hall event in the capital Accra on Easter Monday organised by local television station Joy News.

“We did not make any promises for 100 days, we made promises for what we wanted to deliver to Ghana during our term in office. Notwithstanding (…) we can can point to some significant achievements in these last 100 days,” he said.

“People are travelling and you go and do this thing on this day. What stopped them from doing it tomorrow when everybody will be attentive? Because they want to hide behind the smokescreen,” Deputy General Secretary of the party, Koku Anyidoho told a local radio on Tuesday.

“They are using a lot of pretense so you go and look for small channel through which you are communicating. And never was the President himself. How come he didn’t do it and Bawumia had to do it,” he added.

President Nana Akufo-Addo was elected on December 7, 2016 after two unsuccessful attempts at the presidency. He beat Mahama at the polls and inherited a country suffering from huge fiscal deficits.

Below is the full list of the achievements as published by the government.

Moving the Focus of Economic Policy from Taxation to Production