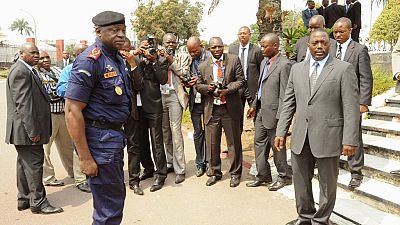 The head of police in the Democratic Republic of Congo (DRC) capital Kinshasa, General Celestin Kanyama has been sacked.

He has been replaced by his assistant, Colonel Palanga Nawej, the Congolese police said in a statement on Monday.

The reason for his sack is not yet known.

General Kanyama was sanctioned by the United States last year for his role in acts of violence and kidnappings targeting civilians, women and children.

The U.S. Treasury froze his assets in the United States and prohibited American entities from having any transaction with him.

In January 2015, General Kanyama led Kinshasa police to stop a demonstration that resulted in the death of more than 40 people, including twenty by the police, said the Treasury.

Between late 2013 and early 2014, during a police operation called “Likofi” intended to fight against gangsters, at least fifty young men and boys were killed and thirty disappeared.

The newly appointed chief of police is reported to be the people’s favourite.