US warships are sent to the Korean peninsula 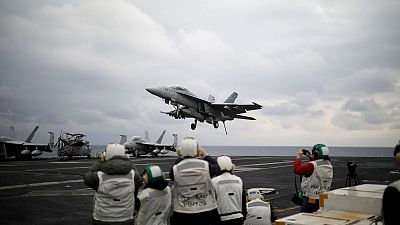 Two days after hitting a Syrian airbase to punish the Assad regime for a suspected chemical attack, the US is flexing its military muscle again – this time for the attention of North Korea.

Amid growing concerns about Pyongyang’s advancing weapons programme, the Pentagon on Sunday ordered an aircraft-carrier led navy strike group to head towards the western Pacific Ocean near the Korean Peninsula.


Japan’s Prime Minister Shinzo Abe, who has voiced support for the Syria airstrikes ordered by President Trump, spoke to the US leader earlier on the telephone.

“I told President Trump that we highly praise the strong US commitment to the peace and security of its allies and the world,” he said.

“On North Korea….We completely agreed that unity between Japan, South Korea and the US is very important.”

Japan is also closely watching China’s response. Earlier this week President Xi Jinping met Donald Trump in Florida, where the US President pressed his counterpart to do more to curb Pyongyang’s nuclear activities.

Trump has said he would be ready to act unilaterally to address North Korea’s nuclear programme if China does not step up to help with the matter.


The isolated regime of Kim Jong-un has carried out five nuclear tests and scores of missile tests including on the eve of President Xi’s US visit.

Defying UN sanctions, North Korea is believed to be building its nuclear arsenal and developing missiles capable of hitting the United States.