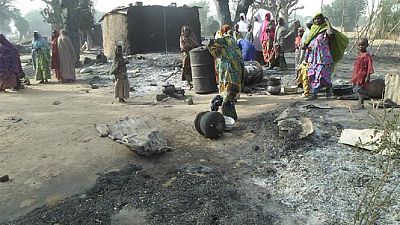 <h3>A dog in northeastern Nigerian town of Maiduguri in the Borno state saved the day at a wedding ceremony after it fought a female suicide bomber who was about to detonate a bomb on Sunday.</h3> <p>The teenage suicide bomber was stopped from infiltrating the crowd by the dog belonging to a resident present at the wedding ceremony. </p> <p>She detonated the bomb strapped around her body killing herself and the dog, Nigeria police spokesperson in Borno, Victor Isuku confirmed to local media.</p> <p>The incident is reported to have occured at a town called Belbelo a few hours after the killing of three suicide bombers in two foiled suicide attacks in nearby towns.</p> <p>One civilian was injured in that attack and a truck partly damaged.</p> <blockquote class="twitter-tweet" data-lang="en"><p lang="en" dir="ltr">Three suicide bombers killed in foiled attacks in northeastern Nigeria <a href="https://t.co/v3nAj58o98">https://t.co/v3nAj58o98</a></p>— africanews (@africanews) <a href="https://twitter.com/africanews/status/848543932992585728">April 2, 2017</a></blockquote> <script async src="//platform.twitter.com/widgets.js" charset="utf-8"></script> <p>Maiduguri has been the city worst hit by Boko Haram’s eight-year-old campaign to create an Islamic caliphate in northeastern Nigeria.</p> <p>These attacks have killed about 15,000 people and forced more than 2 million to flee their homes.</p>