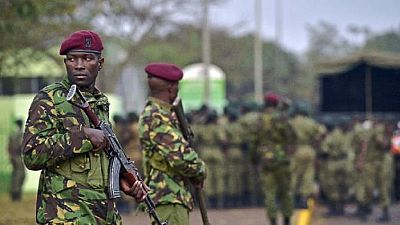 <p>Kenya has arrested a suspected Islamic State militant on the country’s “most wanted” list who allegedly helped send recruits to Libya and Somalia, police said on Thursday.</p> <p>Police seized Ali Hussein Ali, who is nicknamed “Trusted One”, and two accomplices in the coastal town of Malindi on Monday.</p> <p>In a statement, the police said Ali had helped smuggle recruits to Islamic State in Libya where he has ties with a human trafficking ring, and to the al Shabaab militant group in Somalia. He also moved money around East Africa and beyond for Islamic State, police said.</p> <p>Kenya has in recent years suffered a series of attacks by al Shabaab, which is waging an insurgency against the U.N.-backed government in Somalia, where Kenya has deployed peacekeepers.</p> <p>Islamic State has also claimed at least two low-level attacks in Kenya.</p> <p>Kenyan police said Ali was born in the Somali capital, Mogadishu, and moved to Kenya in 2010 under the guise of being a tourist. He then moved to Libya, via South Africa and Sudan, where he joined IS, before returning to Kenya last November, police added.</p> <p>The two men he was arrested with are also suspected of having links to Islamic State and al Shabaab, the police said.</p>