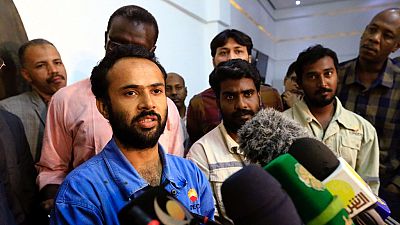 <p>South Sudanese rebels said on Thursday they had freed three oil workers from Pakistan and India that their fighters had seized earlier this month.</p> <p>The three were released on the orders of the rebels’ leader, former vice president Riek Machar, his <span class="caps">SPLA</span>-IO group said.</p> <p>The Pakistani national worked for <span class="caps">DAR</span>, a consortium including China National Petroleum Corporation (<span class="caps">CNPC</span>), China’s Sinopec and Malaysia’s Petronas, in Upper Nile state.</p> <p>The two Indians working for South Sudan’s petroleum ministry were kidnapped in northeast Maiwut county.</p> <p>The three men were flown to Khartoum via Addis Ababa after their release, a Sudanese foreign ministry official told reporters at Khartoum airport when the oil workers arrived.</p> <p>He said Sudan and Ethiopia had contacted the rebels, at the request of India and Pakistan, to secure the freedom of their nationals.</p> <p>One of the released men said his rebel captors had told him to pass a message to foreign oil companies to stop operating in South Sudan because oil revenues were being used to fund war.</p> <p><span class="caps">SPLA</span>-IO deputy spokesman Lam Paul Gabriel said there were no orders given in relation to locals who were seized alongside the foreigners and they would continue to be held.</p> <p>South Sudan, which split away from Sudan in 2011 after decades of conflict, has been mired in civil war since President Salva Kiir sacked Machar in 2013.</p> <p>The fighting has forced millions to flee their homes, split much of the population along ethnic lines and paralysed agriculture, leaving the country facing famine, according to the United Nations.</p>