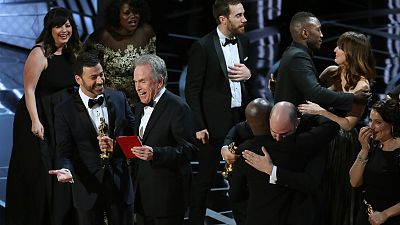 There was a moment of real drama at the Oscars when multiple winner ‘La La Land’ was announced as the Best Picture by Faye Dunaway and Warren Beatty only for the accolade to be withdrawn and handed to ‘Moonlight.’

It was what you call a glittering gaffe.

Here's what happened to your “boring” and “predictable” #Oscars night. pic.twitter.com/EVQeTN7UzM

When everyone had calmed down the ‘Moonlight’ director Barry Jenkins spoke:“There was a time when I thought this movie was impossible that I couldn’t bring it to fruition, I couldn’t bring myself to tell another story. But this is when, everybody behind me, on the stage said, no that is unacceptable.So I just wanna thank everybody up here behind me, everybody out there in the room, because we didn’t do this you guys chose us. Thank you for the choice I appreciate it.”

PricewaterhouseCoopers statement: “The presenters had mistakenly been given the wrong category envelope” https://t.co/GL7jk22T7e #Oscars pic.twitter.com/kbc5jkYfQT

The Best Foreign Language film went to the Iranian Asghar Farhadi for his movie ‘The Salesman.’
The filmmaker boycotted the evening in protest of Trump’s travel ban, he released the following statement:“I’m sorry I’m not with you tonight. My absence is out of respect for the people of my country and those from other six nations who have been disrespected by the inhumane law that bans entry of immigrants to the US. Dividing the world into the US and our enemies creates fear – a deceitful justification for aggression and war.”

“I am sorry I am not with you. My absence is out of respect for the people of my country…” Asghar Farhadi https://t.co/lD4cycRxSv #Oscars pic.twitter.com/I7Gaf7MUYu

For a full list of the 2017 Oscar winners see here.