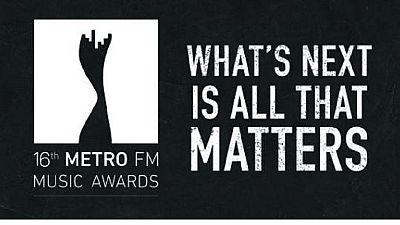 The South African Broadcasting Corporation (SABC)s the biggest radio station in the country has announced the finalists for the 16th metro FM music awards (MMA 16) with the theme “What is next is all that matters.”

The 16th metro FM Music awards will be hosted by the multi-talented Ms pearl Modiadie along with radio legend and personality Amon Mokoena.

Modiadie and Mokoena host the midday show “the great Escape” on Metro FM.

This year’s event which is in partnership with the City of Durban and the Kwa-Zulu natal provincial government, will be held at the ICC in Durban, on Saturday.

Music lovers from within the continent and abroad are expected to flock Durban to witness the winners which will be broadcast live on SACB 1.

The event will be held at the Inkosi Convention centre (ICC) in Durban, kwa-Zulu Natal.

The announcement of finalists also officially opened the voting lines for the public to vote for their favorite artists in the various categories.

Voting lines were opened to the general public at midnight on January 17, 2017. Voting for the song of the year will close on Saturday night of the awards.

For a second year running, winners in the respective categories will receive an award prize money of R100,000 per category.